Do you still believe in Democracy? 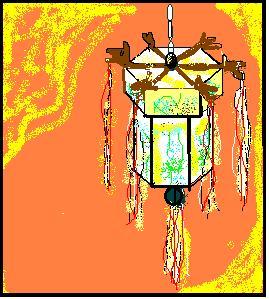 The word “illumination,” in all authentic eastern doctrines, is equivalent to Knowledge (1) par excellence.

Kon-Tan is a traditional and well-known Chinese lacquered wood lantern with several delicately drawn rectangular glass “windows.” The basic model has six sides and twelve windows, distributed in two “parts,” as shown in the illustration (fig.1).

To begin with, it is of interest emphasizing that symbolism, in the context of eastern doctrines, is what provides the communication between two worlds, i.e., the manifested (nature) and the spiritual, or, in other terms, between the physical and the metaphysical.

To better understand this concept, it suffices to recall that the Sioux, for example, are not “sun worshipers” or pantheists as the academia insists; the contemplation of the sun as a symbol signifies abstracting from its appearance and concentrating on its symbolism, which is related to the idea of principle (origin), light (knowledge) and the sustentation of life.(2)

We can say that in a traditional context all art, without exception, is symbolic, including in this definition even the small objects of daily use, such as a comb or a necklace (3). Objects have their “practical” utility, no doubt, but above all, they are symbolic representations that remind and “transport” those capable of interpreting them. It is as if each thing provided simultaneously with its utility a transcended knowledge...

Retaking our central theme, we will offer some indications about the symbolism of the Kon-Tan; we will discover this lantern to be a cosmological synthesis of the millenary traditional Chinese knowledge, which remounts to Fo-hi, (3700 BC), author of the Yi-king or “Book of Mutations.”(4)
Kon-Tan is a lantern with six faces and twelve windows; seen from above, its wooden structure has a hexagonal form with three crossed poles, presenting the appearance of this drawing: 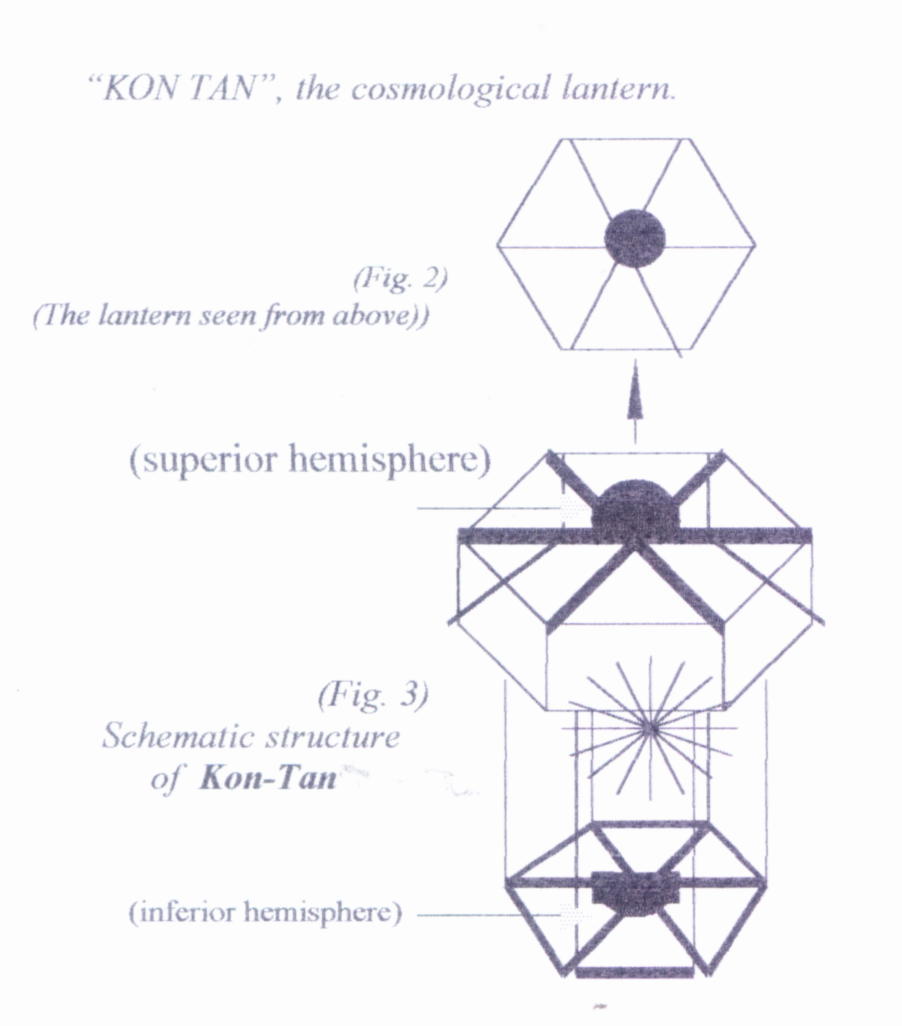 We know that the number six or senary symbolically represents the union of the macrocosm with the microcosm, and Salomon’s seal is an example of this concept. Six is also the number of spatial directions, i.e., North, South, East, West, Zenith and Nadir.

Each of the six pole’s extremities is a Dragon head (5) from whose mouth hangs a silk chord (“Lon”(6) ), yellow and/or red; in a slightly smaller scale, the same hexagonal form repeats itself in the inferior part of the lantern.

At the center of the drawing (fig. 2), in black, we have a hemisphere through which a pole is connected for the support of the Kon-Tan; in the inferior part, we have the complementary hemisphere, in which a pole holds the main silk chord: it lies in the middle and is longer and thicker.

Each window has its frame, richly chiseled and cut, with forms that represent the air (above) and the water (below). The internal part of the lantern is empty, with no material axe crossing it; there the candle (of resin or wax) is put, or, more recently, the electric lamp. The opaque glass is painted in the traditional style of the masterpieces of the “Chinese South school” that distinguishes itself by the delicacy and refined simplicity of its means and the “spontaneous” character of its watercolor technical procedure. Well, these paintings of the “South school” of Buddhism — a designation that does not have a geographic meaning, but symbolizes a tendency — represent in reality the Taoist painting, such as perpetuated in the frame of Chinese and Japanese DHYANA.(7)

Frequently, these pictures portray geomantic landscapes (8) seen from twelve different angles. For example, it is common to appreciate in the watercolors a small temple at the edge of a precipice; rocky mountains; lakes and rivers; clouds and vapors in a sweet and imperceptible transition from the ground up to the sky.

Familiarized with the constitutive elements and the general form of the Kon-Tan, we can begin a few considerations on its symbolism.

We have seen that in the superior and inferior parts of the wooden structure supporting the windows, there are two hemispheres: united, the two halves represent the “egg of the world”(9), whose “fecundation” produces a cosmogenesis.(10) Trespassing the axe of the superior hemisphere, there is a hook that connects itself to the “chains of the worlds”(11) (the Sûtrâtmâ (12) of Hinduism), or to the successive links of the various planes of existence of which our world is one.

The Kon-Tan has six superior facets and six inferior ones, making up the number twelve, that refers to the annual cycle and to the twelve zodiacal Windows.(13) Each of the six faces is dominated by an extreme-orient dragon; this known Chinese symbol presents a winged head, its superior part has the lines of a terrestrial animal, its inferior part has scales and a fish tail; is it the Pontific Dragon, because dominating and interlocking the three worlds: the heavenly, intermediary, and terrestrial.

As in Christianism and in other traditional forms the Word is at the Beginning; of the dragon’s mouth (“Long”) comes out the red or yellow silk (“Lon”) representing the Logos (word) as light and power; each silk string represents the spiritual influence surrounding and sustaining the worlds.

The empty center of the lantern is the seat of Light; its invisible axe is the “Diamond Pillar,” whose inferior extension supports the main silk pendant symbolizing the King-Priest, occupying for this reason a central position in the group. Taoism affirms: “the rotation of the worlds depends in the unmovable center.”

From a more exterior or superficial point of view, the Kon-Tan mirrors the multifaceted world through its twelve windows; this world is illuminated by an internal light and is supported by a link of six dragons. However, if we deeply consider this lantern, i.e., from a symbolic angle, a true transformation occurs, in the strict etymological sense of this word: “ beyond forms.”

Each apparent plane we see is understood, “dominated” and suppressed, giving way to a new successive deepening, until we no more see a lantern because vertiginously transported to its very essence. When this occurs, the superficial no more has meaning. It disappears.
In this case, whoever sees the painted landscapes in the glass windows, is truly seeing the harmony of natural elements in their maximum manifestation, which takes the observer to a time-space synthesis.

The very form of the Kon-Tan suggests such a synthesis when combining images, proportions and rhythms with cyclical numbers (3, 6, 12, 36, 108 etc) (14) that determine the architecture of the structure.
This first synthesis remits the privileged observer to the light that sustains all appearance or manifestation, a light that is not directly seen, but that lies at the origin of all associated with the Word that is Long, the cosmological dragon. This Dragon is unfolded in six in the Kon-Tan, for we have seen that the senary synthesizes the macrocosm and the microcosm; from its mouth flow the red and the yellow in the silk thread, the Word as light and power, the cloth as weft and warp of worlds ...(15) 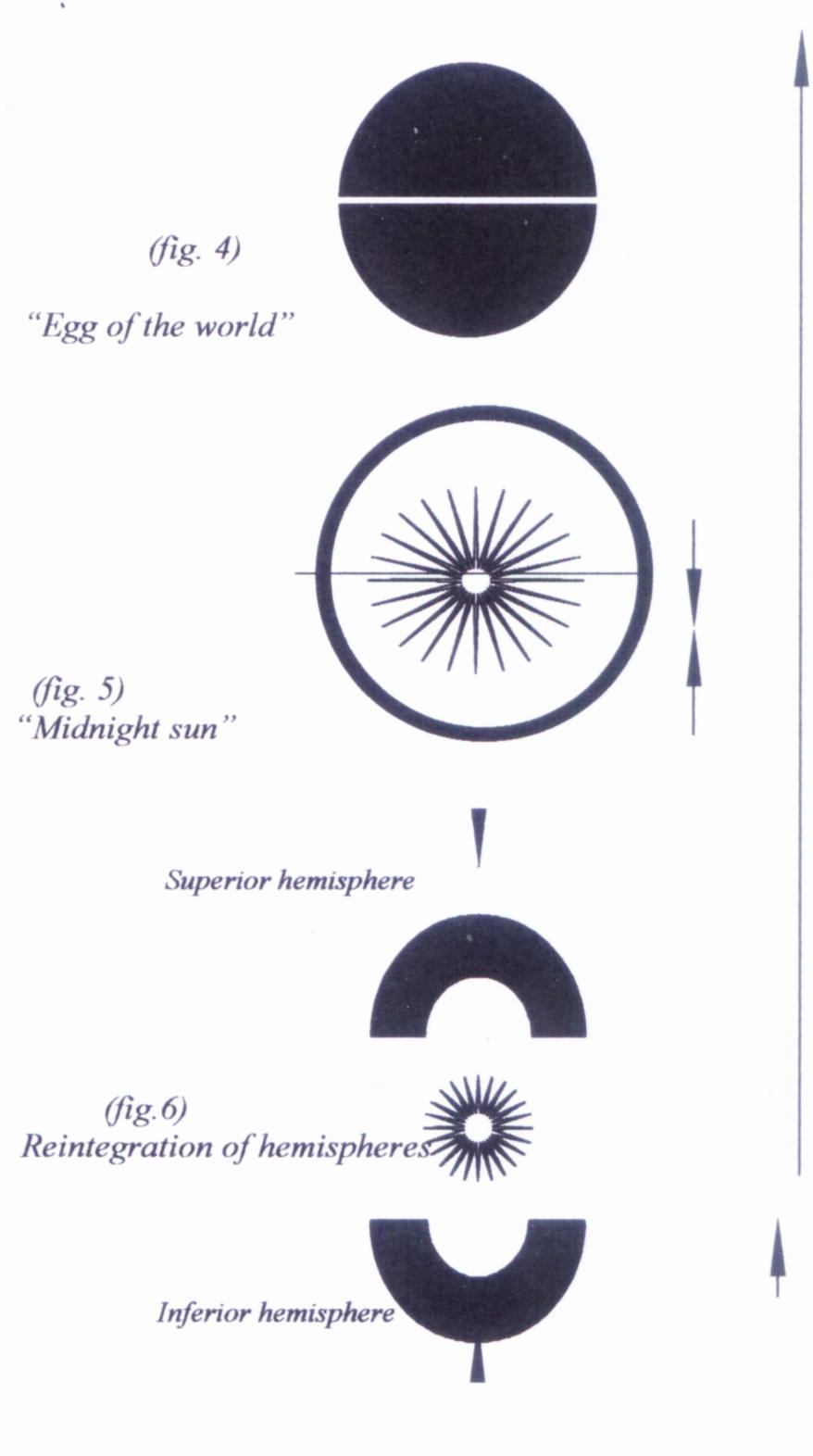 Thus, a new light illuminates the Kon-Tan, from the outside to the inside and from the inside to the outside, like the diastole and the systole of the heart, diffusing and returning power and knowledge. From the Dragons, the Observer is now levered in an instant to the Center through the convergence of black beams (see figure 2) remitting to the superior hemisphere.

Between the two hemispheres (fig.6), already in an internal perspective, there is the Light that sustains the worlds (fig.5), and in this instant, one and the other (besides the observer) unite, and, the exterior world having disappeared, we simultaneously see the black original egg (fig. 4), in which everything reintegrates.

This Egg (black, for without Darkness there would be no Light) is a world in potency, among indefinite others in the chain of worlds, represented symbolically by the chain (Sûtrâtmâ) that supports the Kon-Tan.

These brief indications can perhaps provide to those who appreciate aesthetics (16) a new light on traditional art in general, whose root and reason for being is Knowledge par excellence.

We can say that the Kon-Tan — the cosmological lantern — is an exteriorization or emanation of this Knowledge, impregnated with symbolism, a vehicle that transports and returns “searches” (17) to Knowledge itself.

(1) “Knowledge,” in the context of traditional doctrines is not a mere accumulation of information, but the effective spiritual realization inherent to it.

(3) Titus Burckhardt and Ananda K. Coomaraswamy are unbeatable in the exposition of this theme.

(5) Dragon is “Lung” in Chinese, presenting a curious assonance with Logos (the Word).

(6) One more notable assonance, concordant with Logos and “Lung”.

(7) See, Titus Burckhardt’s, “The landscape in the Extreme-Orient art,” chapter VII of the extraordinary

(8) It refers to the sacred geography that qualifies determined places.

(12) The Sûtrâtmâ is the conducting thread of celestial influences; a symbolic chain or chord that connects the worlds or states of existence; a pearl necklace or a rosary "illustrate" such concept .

(14) It is not by chance that space is measured by the decimal system and time in multiples of the number three. See, regarding this, Marcel Granest's extremely important “La Pensée Chinoise”, Ed. Albin Michel.

(16) Word whose etymology is little known, but that, however, is revealing. It means "superficial irritation" (cf. Ananda K. Coomaraswamy ).

(17) Have we not the biblical citation "search end you will find"?